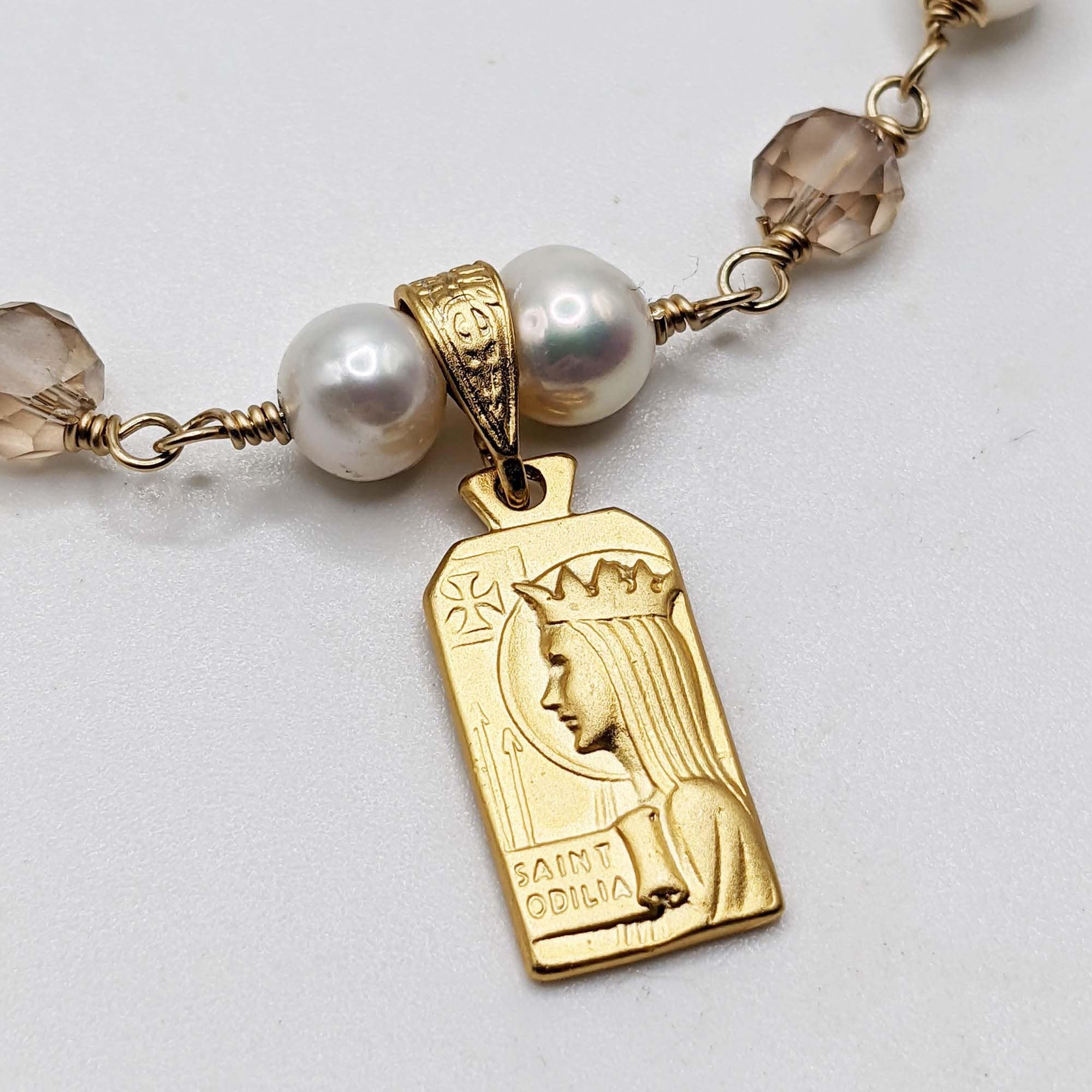 $80.00 USD2 available
Buy Now
This sweet bracelet of freshwater pearl and crystal has a lovely medal of Saint Odilia as the centerpiece. A delicate heart hangs from the end of the clasp. The freshwater pearls are wire wrapped with gold filled wire. Saint Odilia is patron saint of those with eye afflictions and blindness.

SAINT ODILIA
About the year 300, Saint Odilia and ten other virgins set out from England on a pilgrimage to the East. By accident or plan the ship in which they sailed went up the Rhine. They were captured by some soldiers and taken to Cologne. There the young women were killed in defense of their Christian faith and their purity. St Odilia's future role as the Patroness of the Order of the Holy Cross is pictured by the Crosier standard and her motto, "I have chosen the cross."

ST LOUIS OF FRANCE HELPS FOUND THE PARISH HOUSE
The Paris house of the Crosiers is very important in the history of Saint Odilia. It was here that she appeared to John of Eppa with her special message. The Crosier community was founded in Paris in 1258. King St Louis was particularly interested in the Order of the Holy Cross because of his great devotion to the Passion of Christ. Construction of the Church was begun about the year 1268.

SAINT ODILIA APPEARS TO BROTHER JOHN IN PARIS
In the spring of 1287, Saint Odilia appeared three times to Brother John of Eppa, a Crosier lay brother, in the Paris monastery. She told him that God had commanded her to be the Protectress of the Order and where her relics were to be found. Brother John and his companion, Father Louis, journeyed to Cologne and the garden of Arnulph where the relics were buried.

SAINT ODILIA'S RELICS ARE FOUND AND TAKEN TO HUY
After overcoming the skepticism of Arnulph, the two Crosiers began to dig around the pear tree in his garden where Odilia said the relics were to be found. Three urns were unearthed containing the remains of Odilia, Ida and Emma. Many cures took place through the intercession of Saint Odilia. The newly-discovered relics were taken to the mother house of the Crosiers at Huy, Belgium, with great solemnity.

PERSECUTED BY THE WORLD - THE ORDER LOSES THE RELICS
The Order suffered much during the Protestant Revolt, the French Revolution and the Napoleonic wars. The Mother house at Huy was destroyed but a priest managed to escape with the relics of St Odilia. They were to remain in a parish church in Kerniel, Belgium, for many years.

THE RELICS OF SAINT ODILIA ARE RETURNED TO THE ORDER
In 1949, the relics of Saint Odilia were returned from the parish church at Kerniel where they had been since the French Revolution, to the care of the Order of the Holy Cross. They were taken in solemn procession from Kermiel to the Crosier monastery at Diest, Belgium as shown in these windows. In 1952 a major relic of Saint Odilia was brought to Onamia, Minnesota. A shrine in honor of the Patroness of the Order and the Patroness of the blind and afflicted was then set up in the seminary chapel.