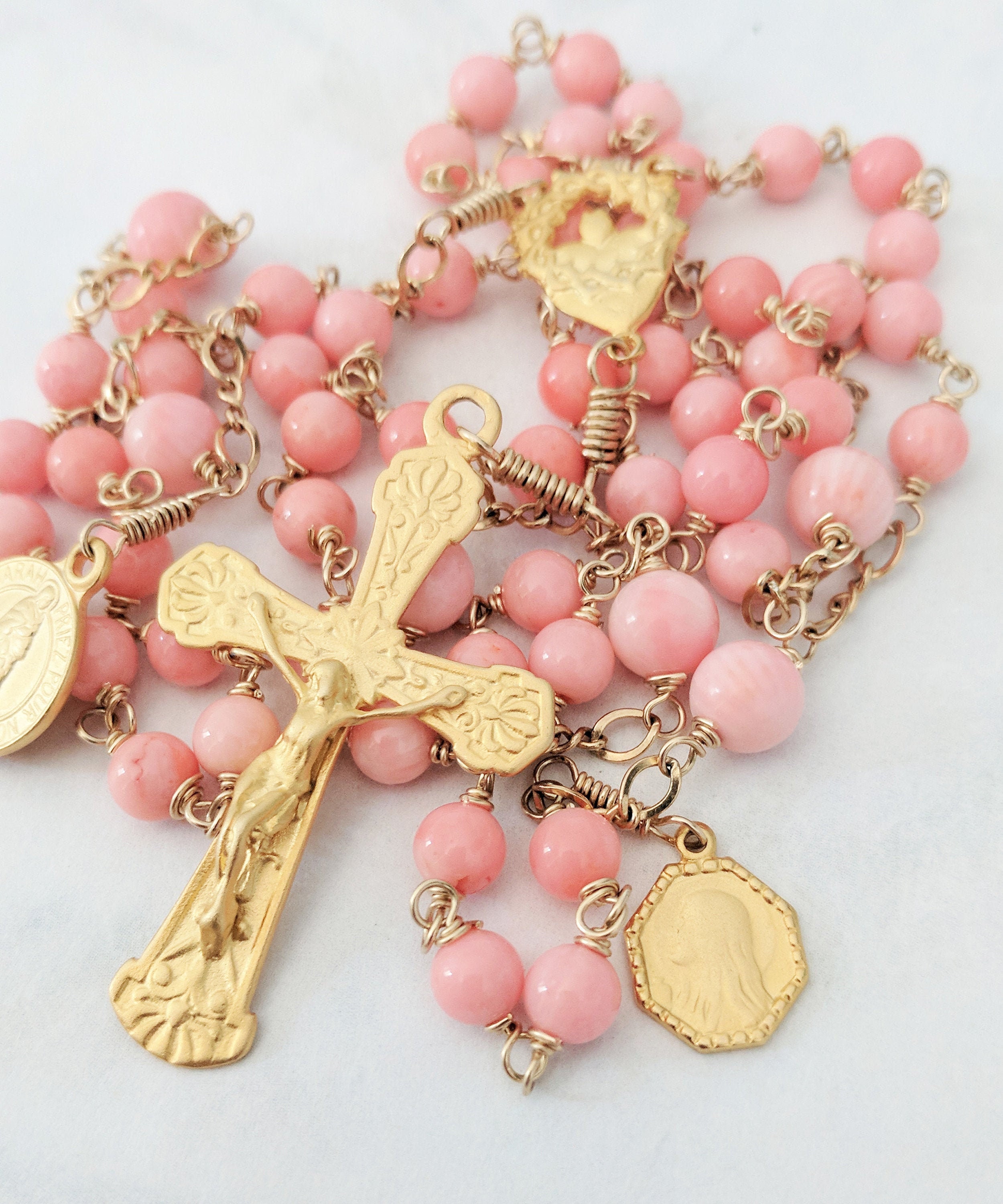 $166.00 USD1 available
Buy Now
This beautiful rosary is handmade with pink coral. Each bead is wire-wrapped with gold filled wire. The chain is Parisian brass chain. The crucifix and center of the Holy Crown of Thorns are 18K gold vermeil. The rosary is complete with a tiny 18K gold vermeil medal of MARY OF MAGDALA holding her alabaster jar. There is also a tiny 18K gold vermeil medal of the Saintes-Maries (Saint Mary Jacobi & Saint Salome - mothers of the apostles), who came with Mary Magdalene on a boat from Palestine to Gaul (now France) in 47 AD.

From the end of the crucifix to the middle of the third decade of Hail Marys measures 23.5 inches.

After narrowly escaping death during a storm at sea the boat finally came to shore on the coast of Gaul in a town now called Saintes-Maries-de-la-Mer in Camargue. Mary Magdalene, Lazarus, Maximin and Cedonius traveled on to Marseille where Mary Magdalene began to preach. They ended up converting the whole of Provence. Lazarus became the first bishop of Marseille. Mary Magdalene then went on to Aix where Maximin had already gone, some twenty miles north of Marseille. Maximin became the first bishop of Aix and Mary Magdalene retreated to a mountain cave on the plain of the Plan d’Aups known as Sainte Baume (47 AD) where she remained alone for the last thirty years of her life in contemplation, prayer and penance. She is said to have been lifted up by the angels seven times each day at the canonical hours and fed heavenly nourishment. The tiny chapel of Saint Pilon on the crest above Sainte Baume was built in memory of Mary Magdalene being raised by angels.

Maximin, Cedonius and Marcelle are buried in Sainte-Marie-Madeleine Basilique at St Maximin-la-Sainte-Baume. Mary Jacobe, Mary Salome and Sara are buried in the parish church of Saintes-Maries-de-la-Mer. Martha is buried in St Martha's Church in Tarascon, Lazarus' skull is in the Sainte Marie Majeure Cathedral in Marseille, and the remains of Sainte Anne are in Apt.

CORALS grow on rocky sea bottom with low sedimentation, typically in dark environments—either in the depths or in dark caverns or crevices. The original species, C. rubrum (formerly Gorgonia nobilis), is found mainly in the Mediterranean Sea.