Magdala is a town on the northwestern shore of the Sea of Galilee at the foot of Mount Arbel. Its most famous citizen is Mary Magdalene or Mary of Magdala. Mary Magdalene is mentioned in the Gospels as being among the women of Galilee who followed Jesus and his disciples and supported them “out of their own means.”

At the end of the first century there was a flash flood which loosened the earth of the very high and very close Mount Arbel, completely covering the land below it. Magdala has remained a buried treasure for the past 1900 years. This photo below gives you an idea of how Magdala looked a hundred years ago. Up until a few years ago, pilgrims coming to the Sea of Galilee would only pass quickly by the site as they traveled on the highway while a rushed tour guide cried out, “there is Magda… well, too late. It was behind those trees.”

Catholic priest with vision is blessed by divine providence In 2004, Legionary Fr. Juan Maria Solana of Mexico had just been appointed director of the Pontifical Institute Notre Dame of Jerusalem Center. When he first arrived in Jerusalem he wanted to go straight to see the lake—the Sea of Galilee (a 2-hour drive). Fr. Solana had dreams of building a church and hotel for pilgrims in the Galilee. He searched for land and eventually found four privately owned plots on the northwest shore of the Sea of Galilee near the small Israeli town of Migdal and the destroyed Arab village of Al-Majdal. Both were named for the ancient town of Magdala. Fr. Solana then began to raise money for the project.

A private revelation of Fr. Solana’s mother was shared with him when he was a seminarian in Spain. When Fr. Solana was a child his mother had been on a retreat that she said “changed her life.” The last night of the retreat they were meditating on the Gospel of the Resurrection: Jesus appeared to Mary Magdalene without her recognizing who he was until he spoke her name, “M A R Y.” As she heard Him call her by name, Mary Magdalene’s heart flooded with new hope and with unbounding love, for she knew He was alive and that He loved her.

Father Solana’s mother had that same experience…. The next morning after the retreat had ended she walked to the chapel because she wanted to continue her meditation, and as she was walking she heard the Voice of God…..call her name, “M A R I A.” That moment in time changed her life forever, and this was the first time she was to tell anyone her story. Fr. Solana never forgot it. This was the beginning of Fr. Solana’s great friendship with Mary Magdalene. In 2006, with donations Fr. Solana was able to purchase the first plot of land which housed the 1960’s Hawaii Beach resort. Fr. Solana’s idea was to knock down the old holiday cabins and build in their place a hotel for 300 guests. One by one he acquired three more plots of land. He now had a little over 20 acres on the Sea of Galilee which cost $16 million and could finally begin to fulfill his dream. The name given to his project was Magdala Center. The Magdala Center Project plans included a hotel for pilgrims, a restaurant and multimedia center, a center for women and a spirituality center. Building permits were acquired in 2009, but before construction could begin, archaeological surveys were required by the state of Israel.

The dig performed by Israeli Antiquities Authority only went as deep as a foot below the surface when they unearthed a rare archaeological treasure: one of the oldest synagogues in the world, with traces of frescos and decorations dating from the time of Christ and the apostles, where Jesus may well have taught. Remember Matthew 4:23 – “Then he went throughout Galilee, teaching in their synagogues, proclaiming the gospel of the kingdom, and healing every disease and every illness among people.”

First-century synagogues are a rarity, and this is only the seventh synagogue found from this period in Israel. What archaeologists know about the synagogue’s construction also suggests to some scholars that Jews and the earliest Judeo-Christians may have worshipped together at this holy site. The Magdala Stone discovered in the synagogue’s main hall is perhaps the most interesting find. It is a 3-foot-long limestone block elaborately carved on the sides and top. On one side is the first pre-70 Galilean depiction of a seven-branched menorah between 2 amphorae (jars) and fluted columns (another early menorah is the drawing in plaster found in a mansion in the Herodian quarter in Jerusalem). The precise function of the stone remains uncertain – it may have been used as a table on which Torah scrolls were rolled out and read.All this was merely twenty inches beneath the topsoil. Incredibly, no other towns had been built over it in the centuries since. And no one had disturbed it. It was waiting, like Pompeii, to be discovered. A local coin found in a side room of the synagogue was dated from the year 29 CE (Common Era or Christian Era), when Jesus is thought to have been alive.

Copper coin dated 29 CE (Christian Era) is one of the many ancient coins found in the recent excavations at Magdala.

This coin was minted in Tiberias, the capital city on the western shore of the Sea of Galilee built by Herod Antipas in 19 AD who bore the title of tetrarch (“ruler of a quarter”). Herod Antipas named the city after Roman Emperor Tiberius who ruled from 14 AD to 37 AD. Herod Antipas was ruler of Galilee and Perea from 4 BC to 40 AD.

One side of the coin is inscribed with the Greek letters ΗΡWΔΟΥ ΤЄΤΡΑΡΧΟΥ (Herod the Tetrarch) around a palm-branch (typical tree found in the region) with the year 33 (ΛΓ – the reign year of his monarch) in the field. The reverse side of the coin inscription ΤΙΒЄΡΙΑC (Tiberias) is surrounded by a laurel wreath. Coins minted at that time used regnal dates, thus the 33rd year of the reign of Herod Antipas = 29 CE, or 29 AD.

The archeologists also uncovered an ancient marketplace and a separate area of rooms with adjacent water pools, presumably used for producing the salty cured fish for which Magdala was famous; a large villa or public building with mosaics, frescoes and three ritual baths; a fishermen’s neighborhood, scattered with ancient hooks and other equipment; and a section of a first-century harbor. The remains of the ancient synagogue were discovered at the precise spot where the architects had planned to erect an ecumenical chapel, to the right of the hotel entrance. This meant that the building plans had to be changed to accommodate them.

After the archaeological finds an archaeological park was a necessary addition to the Magdala Project.  The dig continues at least until the end of 2014 and once it is finished about half of the property will contain the exposed remains of the city of Magdala and its first century synagogue. Magdala archaeological site near the Sea of Galilee

The spirituality center is called “Duc in Altum,” a Latin phrase meaning “cast into the deep,” referencing a section of Luke where after a long night of fishing and catching nothing Jesus instructs Simon: “Put out into deep water and lower your nets for a catch.” (Luke 5:4)—basically saying “Trust me Simon.” And then they caught so many fish that they were in danger of sinking the boat. Duc in Altum Church in Magdala

Pope Francis blessed the tabernacle for the Main Chapel at the new Duc in Altum Center in May 2014. The Holy Father, Pope Francis, visited the Notre Dame of Jerusalem Center in May 2014 where he blessed the tabernacle that was installed in the “Duc in Altum” Church of the Magdala Center on May 28, 2014. Pope Benedict blessed the cornerstone five years earlier. Magdala is the first consecrated holy site in the Holy Land in the new millennium. On May 28, 2014 the Latin Patriarch of Jerusalem, Fouad Twal, consecrated the Duc in Altum Church at the inauguration of the Magdala Center. The design of the church with the boat as the altar fulfills Fr. Solana’s dream to have the pilgrims really experience Jesus on the Sea of Galilee. “Jesus used to preach to the crowds from Peter’s boat, so we tried to reproduce that idea here.” said Fr. Solana. “Our plans, with a higher providence, merged very, very strongly.” Looking out past the altar in the Duc in Altum Church at the Magdala Center one can see the calm waters of the Sea of Galilee. Duc in Altum Church from above The restaurant and hotel are still under construction. Completing the project will bring its cost to over $100 million, Fr. Solana said only about a third of the necessary funds have been raised so far. Donors are offered sponsorship of one square meter of archaeological digging ($150) or building construction ($1000). Nearly 1000 volunteers from around the world have taken part in the dig.

MAKE A DONATION to the MAGDALA CENTER MAP of the Sea of Galilee

The Sea of Galilee, also known as the Kinneret, Lake of Gennesaret, or Lake Tiberias, is the lowest freshwater lake on Earth (700 feet below sea level). The lake is fed partly by underground springs although its main source is the Jordan River, which flows through it from north to south. The Sea of Galilee is 13 miles long and 8 miles wide and has a circumference of 33 miles.

Jesus and the Sea of Galilee

According to the gospels, Jesus spent most of the three years of his ministry along the five mile stretch of shore of the Sea of Galilee. Here he gave more than half of His parables and here He performed most of His miracles. In the time of Jesus, Magdala was a thriving fishing village and home to Mary Magdalene. It is the town in which Jesus and Mary Magdalene may first have met. 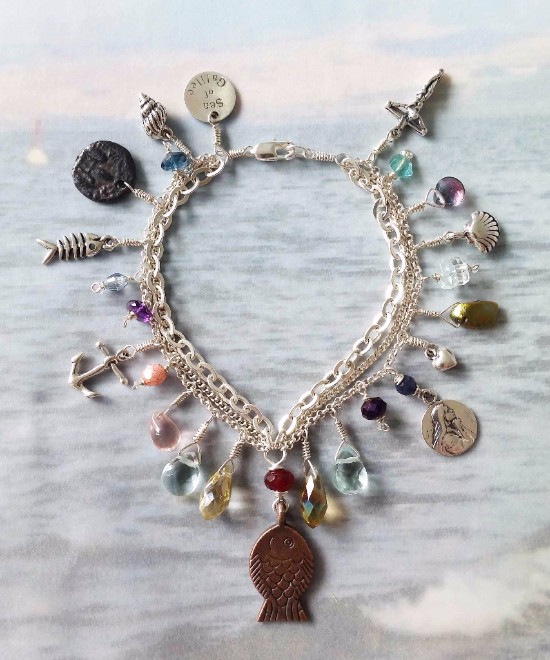 My inspiration for this Sea of Galilee charm bracelet is Father Juan Solana’s incredible story of his Magdala Center Project.

This Sea of Galilee charm bracelet is made with triple Parisian sterling silver chain and has a fishing net feel. A copper fish is the center charm topped with ruby. A small sterling silver medal of Mary Magdalene as she looked when listening to Jesus is one of the focal points of the bracelet. The semi-precious stones from left to right are London blue topaz, light blue crystal, amethyst, Czech glass, pink glass, aquamarine, citrine crystal, aquamarine, purple velvet crystal, sapphire, freshwater pearl, aquamarine, fuchsia topaz and apatite. The background is the Sea of Galilee, where she lived in Magdala when she first met Jesus.

This lovely charm bracelet also includes a seashell, fish bone, anchor, tiny heart, scallop shell and crucifix – all in sterling silver. The “Sea of Galilee” tag at the clasp is made of sterling silver and has “Mary of Magdala” etched on the back. The recast 29 AD ancient BRONZE PRUTAH coin issued by Pontius Pilate and minted in Jerusalem is made of bronze (exactly like the original coin). The bracelet is packaged in a mesh gift bag and comes with a map of the Sea of Galilee. This sterling silver charm bracelet is truly a treasure!

Oh how I would love to go to Magdala one day soon and participate in the archaeological dig!
. I then thought about making “Mary of Magdala” brass tags for special bracelets emphasizing the woman of Magdala who was so favored by Jesus. This one is made with freshwater pearls. 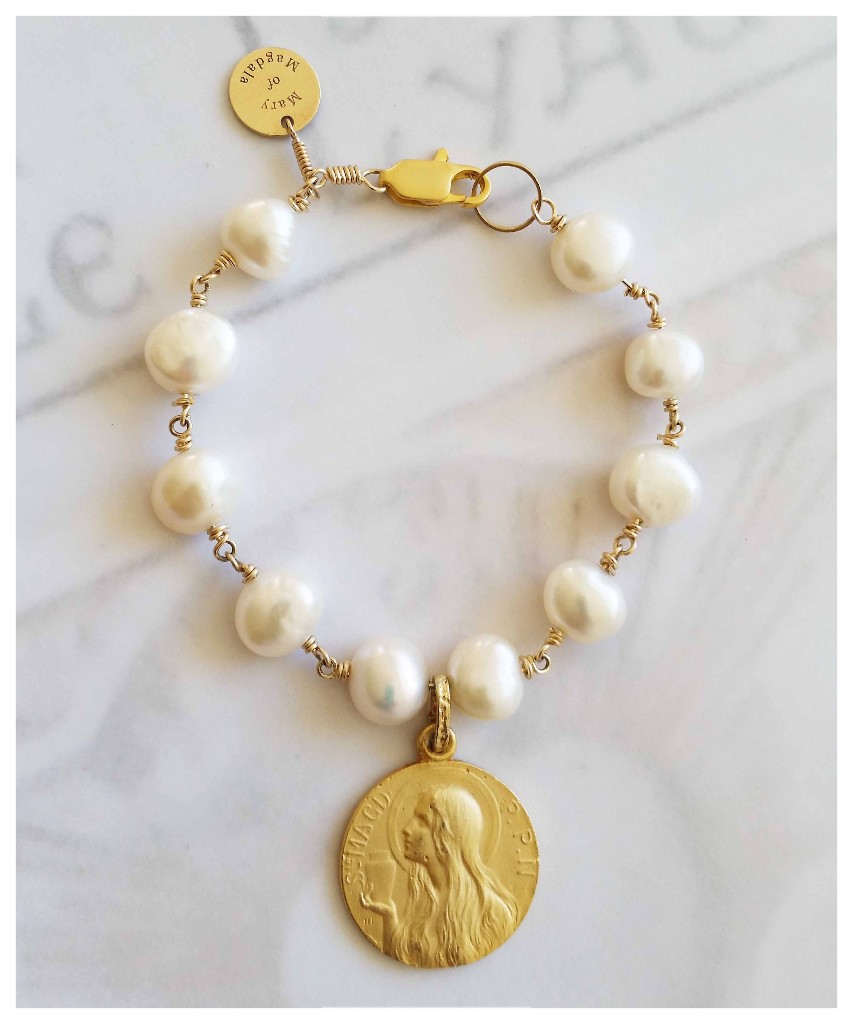 5 Responses to “Magdala, on the Sea of Galilee Unearthed”